Pair of new rubber mounts for the tonearm suspension in the following Bang & Olufsen models:

Based on the age of these decks, it’s safe to say, that the original rubber grommets will have hardened by now, become brittle and perhaps they have even started cracking and falling apart.
Carrying the weight of the tonearm and the counterweight, they will also have allowed the carrier pin to
sag down, opening the pin hole, allowing for too much play in the tonearm suspension.

Note: The original washers are easily lost because they are very small and their presence may not be apparent to inexperienced repairers.

Manufactured by Beoparts-shop to be direct replacements for the original parts. 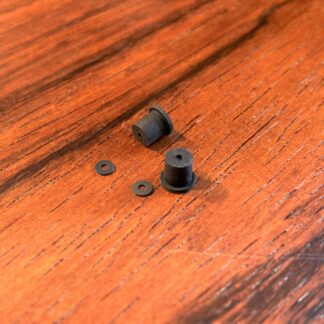