The original capacitors have a limited life-span, and even if the vast majority of the original components fitted by Bang & Olufsen proved to be of a very high quality, providing surprisingly good performance for decades, they are all now close to 40 years old and if not already replaced it’s safe to say that all Beomaster 8000s would benefit from having the filter capacitors replaced by now.

Custom manufactured exclusively for Beoparts-shop.com these are slit-foil type electrolytic capacitors of the correct shape and size with solder lugs. In other words, these are direct replacements.

Slit-foil electrolytics is the absolute best choice for hardworking areas like power supplies in HiFi products where every detail counts in every part of the product. Beomaster 8000 was produced with the goal of achieving the absolute best, so slit-foil capacitors would be the obvious choice here.

The slit-foil construction eliminates the eddy currents forming on the foil surfaces of conventional capacitors.
This means less loss and better response.
It also means, that these capacitors are not just replacements. They are in fact improvements.
Further to this, the new capacitors maximum voltage rating was upgraded a little from 63V to 80V, adding a slight bit of head-room and a healthy bit of lifespan.

One kit contains four capacitors. Enough for one Beomaster 8000.

These are direct replacements for original Bang & Olufsen part# 4200409 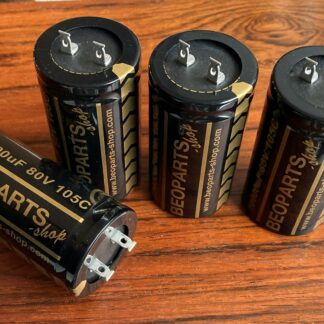