All electrolytic capacitors have a limited life-span, and even if the vast majority of the original components fitted in these receivers by Bang & Olufsen proved to be of a very high quality, providing surprisingly good performance for decades, they are all now many years old, and if not already replaced it’s safe to say that it’ll be about time now.

This kit contains three factory new capacitors in superb quality to replace the old and dried out components;

Custom manufactured exclusively for Beoparts-shop.com these are slit-foil type electrolytic capacitors of the correct specs and diameters with the correct solder lug type.
In other words, these are direct replacements that will fit in the original holding bracket.

Slit-foil electrolytics is the absolute best choice for hardworking areas like power supplies in HiFi products where every detail counts in every part of the product.

The slit-foil construction eliminates the eddy currents forming on the foil surfaces of conventional capacitors.
This means less loss and better response.
It also means, that these capacitors are not just replacements. They are in fact improvements.

During production Bang & Olufsen changed the specifications of the output series capacitors from 3000uF 70V to 5000uF 70V in Beomaster 3000(-2) and Beocenter 3500 to match those of Beomaster 4000.
This change improved the amplifiers damping factor, so of course this has been taken into consideration, and the new capacitors have been produced to include this improvement.

We also took the opportunity to increase the maximum working voltage rating a notch to 80V, giving the new capacitors a bit more headroom and a healthy increase in expected lifespan. 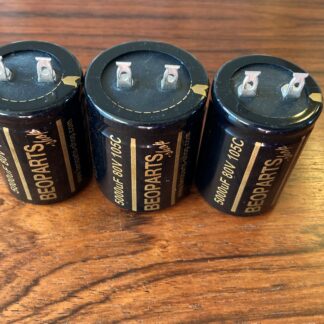