In the above mentioned models, the transformer is held by four screws with each two rubber bushings, one bushing on top of the transformer and one below for each screw.
The original fastener bushings are known to dry out, harden and become brittle. As such they will no longer isolate vibrations
from the transformer, which will transfer to the units chassis and cabinet.
This often causes the unit to produce an annoying humming sound, audible directly from the units cabinet and in severe cases also from the shelf or furniture on which the unit is placed.
For Beomaster 5000, 5500, 6500 and 7000 this can even be observed while the unit is in standby mode.

These are direct replacements for original Bang & Olufsen part# 2938154

One set contains 8 pcs. as shown.

Note: When mounting it’s adviseable to add a little Locktite or similar thread-locking product to the outer 4-5mm of the screws threaded ends. It is also adviceable to tighten the screws only until deformation of the rubber bushings is observed. 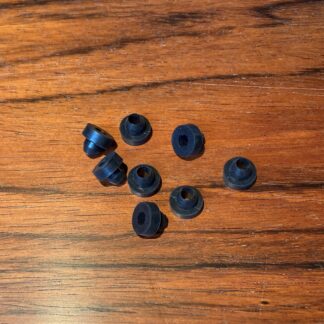