When BeoSound Century show no response to remote control commands, and the option setting (SOUND-1-STORE on f.e. a Beolink 1000 remote control) has been set correctly, the problem is most likely with the remote receiver circuit inside the BeoSound Century.
In this circuit are capacitors that age and wear out, causing malfunction.
This small and convenient kit contains new capacitors to replace the fault-prone components.

Note: BeoSound Century was produced with two different circuit boards for the remote control receiver.
This kit fits the version shown in the second photo only. 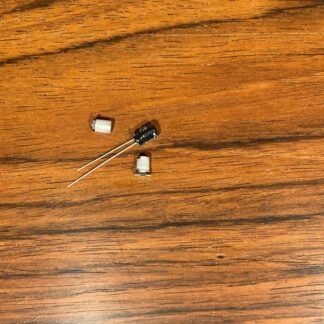